History of Handbells at St. Michael and All Angels Church 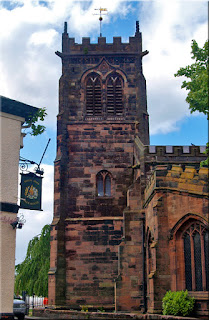 There has been a set of 15 bells in the tower for many years. Their history and origin seem to have been lost, but it is believed that the then ringers purchased, and paid for, individual bells, so that those who could afford to, paid for the larger bells and ringers who were not so well off paid for the smaller bells. Come what may they were kept together as a set.

In 1990, following an inspection and report by the Whitechapel Bell Foundry on the condition of the handbells, it was decided to completely restore the set. To make the set more versatile for tune ringing it was agreed that six more bells should be added. The total cost was £1,556.64 and was met by the ringers from their Earl bequest funds. The tenor handbell was also inscribed "RESTORED AND AUGMENTED 1990 THROUGH THE THOMAS EARL BEQUEST" in honour of the occasion. The set of 21 handbells were then housed in a purposely designed cabinet in the ringing chamber of the tower.

All this changed in 1999, however, when George Bailey, bell ringer and choir master at the time came to demonstrate the handbells at a Mothers' Union meeting held in the vestry of the church. This so inspired some members that they thought they would like to take it further and Branch Leader Murial Barnbrook organised regular practices and with the help of Kate Hayden and Glenys Richardson from the Brereton Handbell Ringers continued meeting at Cledford Mission.

After much thought this group was named S.M.A.A.R.T., standing for "St.Michael and All Angels Ringing Team", and we have added to the bells over the years which has been possible by receiving grants from the Council and fees from ringing commitments. We now have fourteen bells of our own which, when added to the original bells, give a range of about two and a half octaves.

We now have 12 members and meet at Willowmere on a Monday evening. We have many ringing commitments at local care homes, WIs, and other organisations. Our first performance was at the Church Christmas Fair in 2000 where we proudly displayed our new uniform of jade sweat shirts!