Playing in the veranda at Tesco's in Middlewich is always a challenge. What will the weather be like? Will anyone stop to listen? Will they donate anything? To put it mildly, the weather was unkind. It was a cold, foggy day, with the temperature barely above freezing. In fact a day to stay inside by the fire! However, we are hardy souls and set to with gusto as the best means of keeping warm.

Since we had more players than the minimum necessary - we were playing carols arranged for 12 bells, or six players in our case, plus a conductor to try to keep them together - there were opportunities to get hands around a warm drink in the staff room without causing a break in proceedings. We managed to play our 22 piece repertoire twice, with most players trying unfamiliar positions.

I thought we played very well. The good people of Middlewich must have been just as impressed, putting almost £76 in our collecting bucket, more than ever before. A proportion of this will go to Tesco's charities. Perhaps we need to put the rest towards some foot warmers! 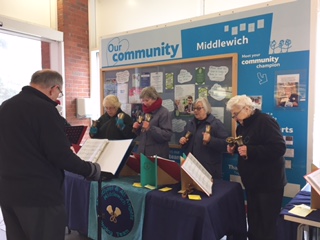 by Middlewich Handbell Ringers Posted at 16:36

On a bright Autumn Saturday morning we set off early for Disley, allowing just over an hour for travel. This proved a little optimistic since there were lots of cyclists en route and then minor ROADWORKS creating a huge queue!!!  Eventually we arrived at our venue, and then had to juggle cars in the car park.

The pieces which will be remembered were "Highland Cathedral" played by Maghull, "God's Train" by Kinder Ringers and a very moving "Let There Be Peace on Earth", also by Maghull. The overall standard was high.

Thanks must go to our hosts, the Kinder Ringers, for their amazing organisation and hospitality - the cakes were delicious! It is 50 years since several teams met at Hazel Grove, the Handbell Ringers of Great Britain being founded the following year. So next year's dates are in our diaries.
by Middlewich Handbell Ringers Posted at 09:09

To see events we have planned for the rest of this year please select our Future Events page from the "Pages" menu on the right.
by Ian Jones Posted at 22:45